The exact origins of Freemasonry are unknown. The oldest document that makes reference to Masons is the Regius Poem, also called the Halliwell Manuscript, printed about 1390 but which was a copy of an earlier work. It is a rhyming poem that tells a legend of Masonry originating with Euclid in Egypt and how it traveled to England over the centuries. Later Medieval manuscripts such as this one expand the legend, tracing Masonry to the children Lamech, a character named in the book of Genesis. 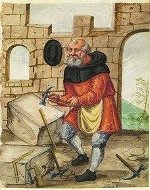 A widely accepted theory among Masonic scholars is that the history of Freemasonry arose from the stonemasons’ guilds during the Middle Ages. The language and symbols used in the fraternity’s rituals come from this era. Medieval stonemason guilds recognized three degrees of craftsman: apprentice, journeyman or fellow of the craft, and master. The stonemasons of the Middle Ages traveled from site to site for the construction of the great churches and cathedrals of Europe, using handshakes, passwords, and other tokens to prove their credentials.

These guilds also provided a liberal arts education for their members, learning Latin, geometry, and other fields of study. They also took care of sick and injured stonemasons, their widows, and orphans.

Records show that these guilds began to include members who were not professional stonemasons, although the reasons for this is not entirely clear. By the 1700s the guilds appear to have transformed entirely into fraternal organizations. In 1717, four lodges in London united to form the first Grand Lodge of England, and records from that point on are more complete. 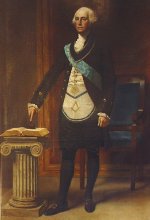 Within thirty years, the fraternity had spread throughout Europe and the American colonies. Freemasonry became very popular in colonial America. George Washington and John Hancock were Masons, Benjamin Franklin served as the head of the fraternity in Pennsylvania, as did Paul Revere in Massachusetts. Another Mason, Chief Justice John Marshall, shaped the Supreme Court into its present form. Masonic values such as religious liberty, freedom of conscience, impartial justice, and equality regardless of one’s parentage or social class can be found in our nation’s founding documents.

Over the centuries, Freemasonry has developed into a worldwide fraternity emphasizing personal study, self-improvement, and social betterment via individual involvement and philanthropy. During the late 1700s it was one of the organizations most responsible for spreading the ideals of the Enlightenment: the dignity of man and the liberty of the individual, the right of all persons to worship as they choose, and the formation of democratic governments.

During the 1800s and early 1900s, Freemasonry grew dramatically. The Masonic tradition of founding orphanages, homes for widows, and homes for the aged provided the only security many people knew.

Masonry entered Ohio when American Union Lodge No. 1, originally a traveling lodge for soldiers chartered in 1776, settled permanently in Marietta in June 1790. By 1808, there were six lodges operating in Ohio. They united to form the Grand Lodge of Ohio, which has been in operation ever since. The first Village Lodge in Burton was chartered in 1826 but only lasted three years. Village Lodge re-opened in 1856 and has served the community continually since. 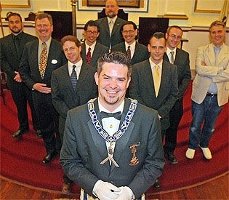 The millions of Masons worldwide continue to help men and women face the problems of the 21st century by building bridges of brotherhood and instilling in the hearts of men ideals for a better tomorrow.

7:30 PM every 2nd and 4th Wednesday of each month, September to June, 14535 N Cheshire St, Burton, OH. Visitors are welcome to join us until the meeting begins. A good number of folks are usually in by 7 PM.